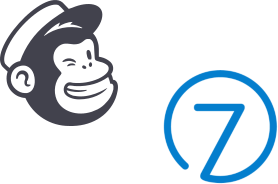 The only native Mailchimp app for Commerce7

Find the integration in the "Apps & Extensions" section of your Commerce7 admin panel. Simply click "Install", select a list to sync to, click "Activate", pour yourself some wine, and relax. You're done.

Products are synced to Mailchimp so that you can easily add product blocks to emails. The images, names, prices, descriptions, etc. will automatically be available in the template builder.

Customer names, emails, club information, tags, locations, birthdays, etc. are all synced in real-time so you always have the latest information in Mailchimp. No more manual CSV imports.

Order details are synced in real-time, allowing you to trigger automations instantly and have the latest purchase history available for segmentation.

Measure the effectiveness of your campaigns with revenue tracking to know exactly which products sold and how much revenue was generated from each email sent.

All of the data is available to trigger the most popular and effective automations such as abandoned carts, welcome flow, winback campaigns, and new product announcements.

Any time a product, customer, or order is added or updated, you'll typically see the data in Mailchimp within 1-2 seconds.

We're here for you. Support requests are answered promptly by someone who understands your business. No auto-responders or outsourcing here.

You've got questions. We've got answers.

What's the difference between Digimatic and other Mailchimp integrations?

Digimatic is the only native Commerce7 app integration for Mailchimp. That means you control everything. Billing is done through Commerce7, so you don't need a separate account with us. Permissions are managed through the app, so you can see exactly what it has access to. Digimatic also has several essential features, such as revenue tracking, club shipping type, unlimited tagging, etc. that the others are missing and some are double the price. As the most popular and widely used Mailchimp integration, we encourage you to reach out to Commerce7 support or talk to other wineries and ask around about which integration is best and why. We're fairly confident you'll land back on Digimatic.

What if Mailchimp's servers go down?

Digimatic uses a sophisticated queueing system such that if we try to send data to Mailchimp and their servers are unavailable, we put the request in a queue and try again in a few minutes. We keep trying until it ultimately goes through, so you'll never lose any critical data due to Mailchimp being unavailable.

What if Digimatic's servers go down?

It's a bit technical, but Digimatic uses a "serverless" architecture, which means there aren't any servers to go down. Through some cloud-based wizardry, the code just kind of lives in the cloud and runs when it needs to without us having to set up a server to host the code. We use Amazon Web Services, the same cloud provider used by Facebook, Twitter, Netflix, etc.

I installed the integration, but I don't see anything. Is it working?

Yes. The integration itself is largely invisible. There's no interface for it. The data gremlins just move data back and forth quietly in the background. The real visible magic of the integration will be in the Mailchimp interface itself. That's where you'll see the pre-populated product blocks, customer tags syncing over, order data and all of the built-in automations will suddenly be available to you since the data is there for them to use.

Does the integration sync data both ways?

The integration is mostly one-way from Commerce7 to Mailchimp. The only data that syncs back is unsubscribes/re-subscribes in Mailchimp will update the marketing opt-in status in Commerce7. We haven't yet found a compelling reason to have Mailchimp list members who have never created an e-commerce account to appear in your e-commerce system, but we can think of a couple ways that would actually cause you some grief. If you have a good reason for a two-way sync, we're happy to discuss to see if it makes sense.

What do I need to do if I'm switching from another integration?

You'll want to fully uninstall and deactivate the old integration first. Having multiple integrations running and updating the same data in slightly different ways will likely cause you some grief. Don't worry about losing order data in Mailchimp (it might disappear when you uninstall the other integration). The first thing Digimatic does when you activate it is to sync all of your historical order data. One other caveat is some integrations use "groups" for club information. Mailchimp has a limit to the number of groups you can have, so this method was breaking for a lot of wineries (who ultimately switched to Digimatic), so we use tags instead. There is no limit to the number of tags. If you have segments using group club names, you may need to switch them over to use tag club names.

Do I need to create a new list/audience or can I integrate with an existing list?

You can integrate to an existing list. When Digimatic syncs, it will add any emails missing from the list, update information for any existing emails, and it will NOT ever delete emails from the list, even if they don't exist in Commerce7. A couple of caveats here. It will sync the tag list 1-to-1, so if you have manual tags or another third party tool setting tags in Mailchimp, those tags may be overwritten to mirror what's in Commerce7. In that case, you may want to use a separate list depending on the situation. Generally, it's good practice to have a list for "e-commerce" separate from any other lists just because you'll mostly communicate to those customers differently than other types of customers.

I'm migrating from another platform to Commerce7. What do I need to do?

We generally recommend waiting until your data migration is complete before activating the integration. That way, if anything goes sideways with your migration, you haven't synced those mistakes over to Mailchimp and doubled your clean-up work. Once you're happy with your data in Commerce7, install/activate the integration, and the data will sync to your list in Mailchimp. If you had a previous integration on the old platform, you can most likely sync to the same list.

Will you help me set up my campaigns and automations? I need some help with Mailchimp.

While that's not a service we generally provide, we do work with several email marketing experts and would be happy to provide you with a referral. If you have an issue with Mailchimp itself, we recommend going through their support system as they have better access to your account for troubleshooting. That said, if you're going in circles with them, drop us a line and we'll see if it's something we can maybe help with.

In the "Apps & Extensions" section of your Commerce7 admin panel, you'll find the Mailchimp integration by Digimatic and simply install it from there. That's it.

Find the integration in the Commerce7
"Apps & Extensions"
section of your admin panel.